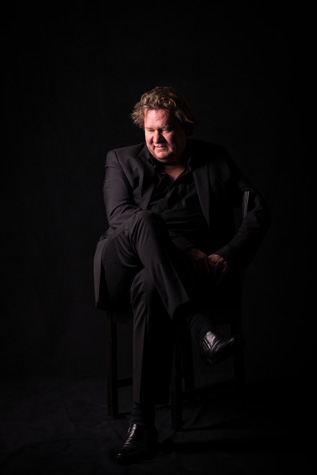 Henry Kelder (1973) is active as pianist, composer, conductor, improviser, chambermusician, répétiteur, cultural enterpraineur and professor. In 2013 three large compositions where premieres: Concerto for altosaxophone and orchestra, A Song for Saint Cecilia´s Day for mixed choir, children´s choir and orchestra and musictheatre VALS. One of his teachers was famous Dutch composer Tristan Keuris.

Besides his activities as head-professor of the piano-faculty of Utrecht University of Arts, Conservatoire and coach pianist at the Royal Conservatoire at The Hague, Henry Kelder is being active in several combinations. With Andre Heuvelman he is touring in The Netherlands and with saxophonist Johan van der Linden he forms Duo Lind´n Kelder. This duo is performing contemporary music with a clear approachability and crossover-element. Many composers wrote for them.

Besides this Henry Kelder is considered to be one of the leading accompagnists and chambermusicians in the country. He is being asked for his improvisations, arrangements in many styles like classical, jazz and pop. Since the end of 2011 he is the founder and artistic director of MatchingArts, an innovative company for performing arts of all kind. He is artistic leader of Keuris Ensemble, International Alkema Composition Contest, Edition MatchingArts, Keuris Composers Contest en Festival het Havikconcert in Amersfoort.
© 2020 by Henry Kelder. All rights reserved. Designed and developed by Bonte Muizen. Photos by Studio m/v, Jouke Visser.